Before the garden, there was a garden:

Without question, the “Habitat Garden,” is the very best garden for learning, and one of the first gardens that should be attempted by any school starting out on their nature journey. Homeowners with small children might take note: it is also the easiest garden to care for.

A rose is a rose…

Words matter, and evidence of learning can be traced through a history of vocabulary.  Over the course of many years, the original “Vegetable Garden” morphed into a “Butterfly Garden,” which evolved into a “Native Garden,” and then became a “Children’s Habitat Garden”, reflecting our growing understanding that while nature is good, it’s really the relationship between children and nature that is our focus.

Obviously, what happens inside the walls, or outside in the garden, matters more than the actual buildings or gardens per se, but surprisingly, I have seen more than one school garden lose focus on the learning, and actually restrict the children in an attempt to protect the gardens. 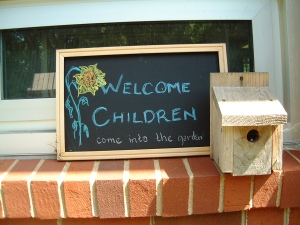 Come into the garden…

During the time of my tenure, shortly after Richard Louv’s book came out, it became evident that what we were doing was creating a habitat for that most endangered species of all:   the human child in the garden, “The Last Child In The Woods.”

At roughly 6’ x 27’, the “Habitat Garden” is about as big as one busy person can joyfully maintain; yet, surprisingly, it turns out to be big enough to comfortably accommodate a busy preschool of five classrooms, plus “Open Play” programs and “free for all” weekends. The steady tramp of tiny feet will quickly reduce any school playground to mud and sticks, as most school playgrounds will readily attest.  Only the hardiest and most resilient plants are able to survive the tender mercies of curious young children, not to mention long, hot, neglectful summers.  At a glance, with minimal expense and effort, a rather rich habitat can take root in three short years, simply by planting about three well chosen plants every spring and fall. 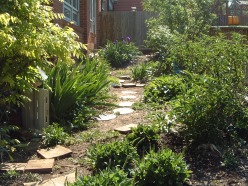 A simple mulch path down the middle of the garden turns out to be the best design for use by very small children, and as time goes by, steppingstones, sculptures, “treasure rocks,” and other items of interest are added or taken away as time and inspiration allow. Formal projects are inspired by the habitat garden, classroom projects push the habitat garden in certain directions, or projects simply happen in the habitat garden setting.  Much learning happens during informal playtime on the playground, as when bugs and creatures spontaneously show up, and eat each other, which is difficult to orchestrate on cue in the middle of a lesson. Having a green librarian on hand during outdoor play is a welcome addition by supervising playground teachers.

While the actual native plants in a habitat garden will differ between different schools, the ability to attract wildlife and/or create a similar sense of excitement and wonder is what makes the “Habitat Garden” go. Part of what makes the garden so fascinating is that it’s always changing and evolving; the Habitat Garden is never “done”.

At this point, the “Children’s Habitat Garden” requires the least care, and in my estimation, based of eight years of trial and error, provides the most educational benefit, by a whopping landslide.

To go forward, look back:

As educators, it is important to find ways to capture the knowledge and wisdom of those who have long worked to make themselves “native to this place.”

Schools and libraries are natural repositories for cultural wisdom, most of which is currently kept via informal oral record, which in fact turns out to be surprisingly durable.  As a society, we would be wise to hold storytelling and folk music festivals to keep alive the “story of place.”   A hard-copy record of these reflections was left with the school to help document the early garden, it’s early roots, and the evolution towards a more integrated and systemic approach to nature education.

At one point, deep into the work, photos from the first vegetable garden were rummaged from the back of a school closet, lending important clues and context for finding our way forward. (Specifically, the importance of immigrant families, who typically hold close ties to the land).

Would it be too “old school” to suggest that good old fashioned poster panels might offer the best long term strategy for documenting the creatures, people, and lessons contained within our sacred school spaces?  Internet postings can all too easily disappear in the poof of a keystroke, taking important historical knowledge with it. Poster panels are a simple way of revealing the children’s learning to the larger community, reflecting and sharing best teaching practices, and providing historical documentation.  This is part of the Reggio method practiced at the Clayton Schools’ Family Center.

The “Children’s Habitat Garden” has proved itself to be sustainable, and arguably regenerative, for it has long flourished with a minimum of care.  Basically, we neglect the garden all summer, it grows all by itself, and then, employing the tactic of “take away”, we clear a path down the middle of the garden shortly before school starts (when it’s blisteringly hot).  The next challenge is for us to think beyond sustainable, and begin to think in terms of generating a fertile and fruitful, or regenerative relationship with the natural world.  Family Centers, with all those babies, are nice places to consider the profound possibility of fertility in partnership with the earth.

The first step in regeneration education is to find unique ways to  “make ourselves native to this place.”  This means to get to know local foods and their seasons, to identify native and non-native plants, to watch out for the birds, insects and animals who come together as part of our community, and to work together to generate a strong sense of who we are, and exactly how we belong to this place.

Knowing the plants, creatures and people who come together at this particular point in time gives one a strong and resilient “Sense of Place.”  Knowing who you are and where you come from puts you at a great advantage when going forth to make your way in a great big uncertain world.  For example, we are people of the corn and tomatoes, oak trees and acorns, lightening bugs and cicadas.  Visitors from the coasts or deserts find our lightning bugs magical, and our cicadas slightly unnerving. 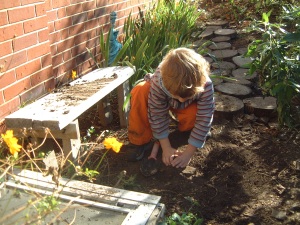 Looking for the Trim Tab

Creating a new garden is the fun part of any nature teacher’s job, but the fun quickly dissolves into drudgery when maintenance chores, like weeding and watering, turn the teacher into a pint-sized maintenance man. With only “one hour” to devote to both teaching and maintenance jobs per day, it quickly becomes clear that nothing will ever be done well, therefore nothing is worth doing without first considering how to get the “biggest bang for the buck”.  This is called the trim tab effect (by Buckmeister Fuller).

The trim tab is that tiny little tab wing at the end of a rudder on a boat, or perhaps on the tip of an airplane wing, that turns up at the end.  By turning that little trim tab ever so slightly, you can turn a great ship, or airplane, practically with one finger.

The One Hour Green Librarian’s main job is to look for the “trim tab” in all things, and at this point, I consider the Children’s Habitat Garden to be one of the most important trim tabs in the whole field of sustainable education.

As the Nature Teacher with the Family Center, I actually had two preschool campuses to cover, so I was technically paid to work two hours per day, or ten hours per week.  (Plus there was plenty of overtime, not to mention a fair amount of personal expense, as would be the same for any good and blessed teacher who walks this earth.)

The Gay campus has good soil, southern exposure, five viable water sources, and incredibly, a nature trail. The Orange Rooms, with two full day classrooms embedded in the local High School campus, were newly constructed, and the playgrounds required a lot of work.

So much to do, so little time:

Like many schools, the Orange Room playground consisted of compacted soil, high brick walls that gave the playground an oven-like feeling, some thin grass, and not much else.

The traditional way of building school gardens is to create raised beds with railroad ties and imported soil, but after touring too many schools with forlorn and forgotten vegetable gardens, plus realizing that raised beds look exactly like sandboxes to preschool children, we opted for more natural looking gardens instead.  Opportunistically planting strips of gardens along walkways and walls not only allows children to reach the garden, it makes for easy weeding, while keeping a wild garden as neat and tidy as possible.

Within the course of three short years, we had several decent gardens to learn from, including a butterfly garden, worm garden and “three sisters” garden which are written about more extensively in later posts.

By the way, the hardest part of using photography as an assessment tool is to remember to take pictures at the start of new projects, when there is seemingly nothing, (or worse), to take pictures of.

It’s also hard to catch the invisible magic of learning, or catch fast-moving kids in action, not to mention guessing what will become important to telling the whole story in hindsight.  Plus it’s also a trick to remain fully present in the garden with the children, while snapping off photos at the same time.  Thus, photo collections always have big gaps, so take a page from my book of mistakes, and think about making a “shot list” before every new project going forward.

Post-note in 2013: Sadly, bulldozers came through the Orange Room Gardens ten years after they first appeared, completely obliterating the gardens.  No worries, for the gardens may one day be lost, but the learning goes on forever.